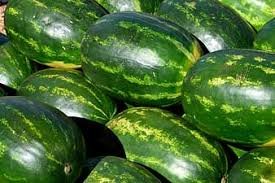 Watermelon?is grown in favorable climates from tropical to temperate regions worldwide for its large edible?fruit, which is a berry with a hard rind and no internal divisions, and is botanically called a pepo. The sweet, juicy flesh is usually deep red to pink, with many black seeds, although seedless varieties exist.

Watermelon is packed with water and nutrients, contains very few calories, and is exceptionally refreshing.

While watermelons are predominantly eaten fresh, they can also be frozen, made into juice, or added to smoothies.

This article tells you everything you need to know about watermelon.

Nutrition Facts
Watermelon consists mostly of water (91%) and carbs (7.5%). It provides almost no protein or fat and is very low in calories.

The carbs are mostly simple sugars, such as glucose, fructose, and sucrose. Watermelon also provides a small amount of fiber.

The glycemic index (GI) ? a measure of how quickly foods raise blood sugar levels after meals ? of watermelons ranges from 72?80, which is high (2).

However, each serving of watermelon is relatively low in carbs, so eating it should not have a major effect on blood sugar levels.

However, due to its fructose content, it is considered high in FODMAPs, or fermentable short-chain carbohydrates (3Trusted Source).

Eating high amounts of fructose can cause unpleasant digestive symptoms in individuals who cannot fully digest them, such as those with fructose malabsorption (4Trusted Source).

SUMMARY
Watermelon is low in calories and fiber and consists mostly of water and simple sugars. It also contains FODMAPs, which cause digestive problems in some people.
Vitamins and Minerals
Watermelon is a good source of vitamin C and a decent source of several other vitamins and minerals.

Vitamin C. This antioxidant is essential for skin health and immune function (5Trusted Source, 6Trusted Source).
Potassium. This mineral is important for blood pressure control and heart health (7Trusted Source).
Copper. This mineral is most abundant in plant foods and often lacking in the Western diet (8Trusted Source).
Vitamin B5. Also known as pantothenic acid, this vitamin is found in almost all foods to some extent.
Vitamin A. Watermelon contains beta carotene, which your body can turn into vitamin A.
SUMMARY
Watermelon is a good source of vitamin C and contains decent amounts of potassium, copper, vitamin B5, and vitamin A (from beta carotene).

Other Plant Compounds
Watermelon is a poor source of antioxidants compared to other fruits (9Trusted Source).

However, it?s rich in the amino acid citrulline and the antioxidant lycopene, which have numerous benefits for health (10).

Citrulline
Watermelon is the richest known dietary source of the amino acid citrulline. The highest amount is found in the white rind that surrounds the flesh (9Trusted Source, 11Trusted Source, 12).

In your body, citrulline is transformed into the essential amino acid arginine.

Both citrulline and arginine play an important role in the synthesis of nitric oxide, which helps lower blood pressure by dilating and relaxing your blood vessels (13Trusted Source).

Arginine is also important for many organs ? such as your lungs, kidneys, liver, and immune and reproductive systems ? and has been shown to facilitate wound healing (14Trusted Source, 15Trusted Source, 16Trusted Source).

Though watermelon is one of the best dietary sources of citrulline, you would have to consume about 15 cups (2.3 kg) at once to meet the Reference Daily Intake (RDI) for arginine (19Trusted Source).

In fact, fresh watermelon is a better source of lycopene than tomatoes (1Trusted Source).

Your body uses lycopene to some extent to form beta carotene, which is then converted into vitamin A.

SUMMARY
Watermelon is a good source of the amino acid citrulline and the antioxidant lycopene, which play important roles in your body.
Health Benefits of Watermelons
Watermelons and their juice are linked to several health benefits.

Watermelon is a good source of citrulline, which is converted into arginine in your body. Both of these amino acids aid nitric oxide production.

Nitric oxide is a gas molecule that causes the tiny muscles around your blood vessels to relax and dilate. This leads to a reduction in blood pressure (26Trusted Source).

Reduced Insulin Resistance
Insulin is a vital hormone in your body and involved in blood sugar control.

Insulin resistance is the condition in which your cells become resistant to the effects of insulin. This can lead to elevated blood sugar levels and is linked to metabolic syndrome and type 2 diabetes.

Reduced Muscle Soreness After Exercise
Muscle soreness is a well-known side effect of strenuous exercise.

Research on watermelon juice (or citrulline) and exercise performance gives mixed results. One study found no effect, while another observed improved performance in untrained ? but not well-trained ? individuals (35Trusted Source, 36Trusted Source).

SUMMARY
Watermelon may reduce blood pressure and insulin resistance in some people. It is also linked to reduced muscle soreness after exercise.

Adverse Effects
Watermelon is well tolerated by most people.

However, it may cause allergic reactions or digestive problems in some individuals.

Allergy
Allergy to watermelon is rare and usually associated with oral-allergy syndrome in individuals who are sensitive to pollen (37Trusted Source, 38Trusted Source).

Symptoms include itchy mouth and throat, as well as swelling of the lips, mouth, tongue, throat, and/or ears (39).

FODMAPs
Watermelon contains relatively high amounts of fructose, a type of FODMAP that some people do not fully digest.

FODMAPs like fructose may cause unpleasant digestive symptoms, such as bloating, gas, stomach cramps, diarrhea, and constipation.

Individuals who are sensitive to FODMAPs, such as those with irritable bowel syndrome (IBS), should consider avoiding watermelons.

SUMMARY
Allergy to watermelons is rare but does exist. This fruit also contains FODMAPs, which may cause unpleasant digestive symptoms.