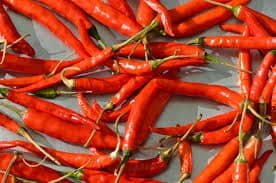 Chili peppers (Capsicum annuum) are the fruits of Capsicum pepper plants, notable for their hot flavor.

They are members of the nightshade family, related to bell peppers and tomatoes. Many varieties of chili peppers exist, such as cayenne and jalapeño.

Capsaicin is the main bioactive plant compound in chili peppers, responsible for their unique, pungent taste and many of their health benefits.

This article tells you everything you need to know about chili peppers.

However, since they are only eaten in small amounts, their contribution to your daily intake is minuscule. These spicy fruits boast (2Trusted Source):

Vitamin C. Chili peppers are very high in this powerful antioxidant, which is important for wound healing and immune function.
Vitamin B6. A family of B vitamins, B6 plays a role in energy metabolism.
Vitamin K1. Also known as phylloquinone, vitamin K1 is essential for blood clotting and healthy bones and kidneys.
Potassium. An essential dietary mineral that serves a variety of functions, potassium may reduce your risk of heart disease when consumed in adequate amounts.
Copper. Often lacking in the Western diet, copper is an essential trace element, important for strong bones and healthy neurons.
Vitamin A. Red chili peppers are high in beta carotene, which your body converts into vitamin A.
SUMMARY
Chili peppers are rich in various vitamins and minerals but usually eaten in small amounts — so they don’t contribute significantly to your daily micronutrient intake.

Other plant compounds
Chili peppers are a rich source of spicy-hot capsaicin.

They are also very high in antioxidant carotenoids, which are linked to numerous health benefits.

Capsanthin. The main carotenoid in red chili peppers — up to 50% of the total carotenoid content — capsanthin is responsible for their red color. Its powerful antioxidant properties may fight cancer.
Violaxanthin. The major carotenoid antioxidant in yellow chili peppers, violaxanthin accounts for 37–68% of the total carotenoid content.
Lutein. Most abundant in green (immature) chili peppers, lutein’s levels decrease with maturation. High consumption of lutein is linked to improved eye health.
Capsaicin. One of the most studied plant compounds in chili peppers, capsaicin is responsible for their pungent (hot) flavor and many of their health effects.
Sinapic acid. Also known as sinapinic acid, this antioxidant has a variety of potential health benefits.
Ferulic acid. Similarly to sinapic acid, ferulic acid is an antioxidant that may help protect against various chronic diseases.
The antioxidant content of mature (red) chili peppers is much higher than that of immature (green) peppers (3Trusted Source).

It binds with pain receptors, which are nerve endings that sense pain. This induces a burning sensation but does not cause any real burning injuries.

Even so, high consumption of chili peppers (or capsaicin) may desensitize your pain receptors over time, reducing your ability to sense the burning flavor of chili.

It also makes these pain receptors insensitive to other forms of pain, such as heartburn caused by acid reflux.

One study found that when 2.5 grams of red chili peppers were given daily to people with heartburn, the pain worsened at the beginning of the 5-week treatment but improved over time (11Trusted Source).

This is supported by another small, 6-week study showing that 3 grams of chili each day improved heartburn in people with acid reflux (12).

The desensitization effect does not seem to be permanent, and one study noted that it was reversed 1–3 days after capsaicin consumption stopped (13Trusted Source).

Weight loss
Obesity is a serious health condition that increases your risk of many chronic illnesses, such as heart disease and diabetes.

Another study observed a significant reduction in appetite and calorie intake only in those who did not regularly consume chili (23Trusted Source).

Despite the mixed evidence, it appears that regular consumption of red chili peppers or capsaicin supplements may aid weight loss when combined with other healthy lifestyle strategies (14Trusted Source).

However, chili peppers are probably not very effective on their own. Additionally, tolerance to the effects of capsaicin may develop over time, limiting its effectiveness (15Trusted Source).

SUMMARY
Chili peppers are associated with several health benefits. They may promote weight loss when combined with other healthy lifestyle strategies and may help relieve pain caused by acid reflux.

Potential downsides
Chili peppers may have adverse effects in some individuals, and many people do not like its burning sensation.

The substance responsible is capsaicin, which binds to pain receptors and causes an intense burning sensation.

For this reason, the compound oleoresin capsicum extracted from chili peppers is the main ingredient in pepper sprays (27Trusted Source).

Over time, regular exposure to capsaicin may cause certain pain neurons to become insensitive to further pain.

Stomach pain and diarrhea
Eating chili can cause intestinal distress in some people.

The symptoms may include abdominal pain, a burning sensation in your gut, cramps, and painful diarrhea.

For this reason, people with IBS may want to limit their consumption of chili and other spicy foods.

Evidence on the effects of chili on cancer is mixed.

Test-tube and animal studies indicate that capsaicin, a plant compound in chili peppers, may either increase or decrease your risk of cancer (32Trusted Source).

Additionally, red chili powder has been identified as a risk factor for mouth and throat cancer in India (35Trusted Source).

Keep in mind that observational studies cannot prove that chili peppers cause cancer, only that people who ate high amounts of chili peppers were more likely to get it.

Further studies are needed to determine whether heavy chili intake or capsaicin supplements are safe in the long term.

SUMMARY
Chili peppers are not good for everyone. They trigger a burning sensation and may cause stomach pain and diarrhea in some individuals. Some studies associate chili consumption with increased cancer risk.

The bottom line
Chili peppers are a popular spice in many parts of the world and well known for their hot, pungent flavor.

They are rich in vitamins, minerals, and various unique plant compounds.

These include capsaicin, the substance that causes your mouth to burn. Capsaicin is linked to several health benefits, as well as adverse effects.

On one hand, it may help promote weight loss and relieve pain when consumed regularly.

On the other hand, it causes a burning sensation, which is unpleasant for many people, especially those not used to eating chili peppers. It’s also linked to digestive upset.

It’s important to pay attention to your own tolerance levels when eating chili peppers. Using them as a spice may be healthy, but those who experience digestive distress should avoid them.