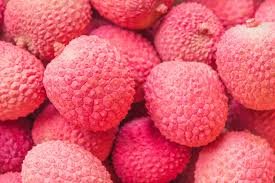 The?lychee?fruit is about 1? to 2 inches in size, oval to rounded heart shaped and the bumpy skin is red in color. Once you peel the skin off, the crisp juicy flesh of a?lychee?fruit is white or pinkish, translucent and glossy like the consistency of a grape, but the taste is sweeter

The lychee (Litchi chinensis) ? also known as litchi or lichee ? is a small tropical fruit from the soapberry family.

Other popular fruits in this family include rambutan and longan.

Lychees are grown in subtropical regions throughout the world and especially popular in their native China, as well as Southeast Asia.

Known for their sweet and flowery flavor, they?re typically eaten fresh and sometimes used in ice creams or processed into juice, wine, sherbert, and jelly.

Lychees have an inedible, pink-red, leathery skin, which is removed before consumption. The flesh is white and surrounds a dark seed in the center.

Lychees are mainly composed of water and?carbs?? which make up 82% and 16.5% of the fruit, respectively (1Trusted Source).

A 3.5-ounce (100-gram) serving of fresh lychees provides the following nutrients. The table below shows the main nutrients in fresh lychees (1Trusted Source):

Besides water, lychees are mainly composed of carbs.

The majority of the carbs in lychees comes from sugars, which are responsible for their sweet taste. They?re relatively low in?fiber.

Lychees are a decent source of several vitamins and minerals, including:

SUMMARYLychees are primarily composed of water and carbs, most of which are sugars. Compared to many other fruits, they?re low in fiber. They?re also high in vitamin C and offer decent amounts of copper and potassium

Like other fruits, lychees are a good source of various?antioxidant?plant compounds.

In fact, they have been reported to contain higher levels of antioxidant polyphenols than several other common fruits (4Trusted Source).

Antioxidants in lychees include:

Oligonol is a dietary supplement that is often mentioned in connection to lychees.

It?s a patented mixture of antioxidants (proanthocyanidins) derived from lychee skin and?green tea, developed by the Amino Up Chemical Corporation in Japan.

The antioxidants are chemically altered to increase their uptake from your gut (8Trusted Source).

However, as it?s not found naturally in lychee fruits, its health effects don?t apply to lychees.

SUMMARYLike most fruits and vegetables, lychees are a good source of antioxidants and other healthy plant compounds. These include epicatechin and rutin. Fresh lychees don?t contain any Oligonol, as is often claimed.

The health effects of lychees have not been studied yet.

Still, further studies are needed to confirm the health benefits of lychees in humans.

SUMMARYThe health effects of lychees have not been studied directly. However, they contain several nutrients and antioxidants that are important for health.

Be the first to review “Lychee, [Lychee] लीची” Cancel reply