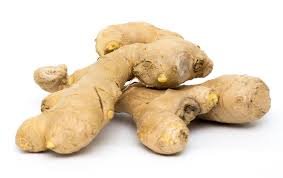 It is hot, zesty and biting yet sweet and warm. Ginger is quite pungent and spicy with a very slight woody flavor that lends a certain mildness to its overall flavor profile. This particular ingredient is as aromatic as it is flavorful.

Ginger not only adds delicious flavor to food — it’s also full of nutrients. People have been using the root for cooking and healing for thousands of years.

Ancient writings from Rome, Greece, China, and Arab countries all describe ginger’s uses as a medicine. It was especially popular in Asian medicine as a treatment for stomach issues, including nausea and diarrhea. Other traditional medical uses for ginger include treating muscle and joint pain, cold and flu symptoms, stomach pain, menstrual cramps, and skin burns. (1,2)

Today, people still consider ginger a natural way to soothe an upset stomach, and there’s research to back up its health benefits. Ginger is also used in tons of modern recipes.

Defining Ginger and Understanding What It’s Good for
Ginger is a tropical flowering plant that originally grew in Southeast Asia but is now widely available from growers around the world. It’s classified as a member of the Zingiberaceae family, making it a close relative of turmeric. (3) The scientific name for ginger is Zingiber officinale, which is thought to come from the Sanskrit name for the spice (singabera).

More in Diet and Nutrition
9 Foods That Help Relieve Nausea
9 Foods That Help Relieve Nausea
The leafy plant grows to about three feet tall and produces clusters of greenish-purple flowers. Ginger’s root or rhizome is the part used as a spice or healing aid. Depending on the variety, the inside of the root can be yellow, red, or white. It’s harvested by pulling the entire plant out of the soil, removing the leaves and cleaning the root.

Ginger can be eaten fresh, dried and stored as a spice, or made into tablets, capsules, and liquid extracts. There’s about 2 percent of essential oil in the root, which is used in the cosmetic industry as a fragrance in soaps and beauty products. (2)

What’s in Ginger Exactly? A Closer Look at Its Nutrition Facts
There are lots of different vitamins and minerals in ginger. (4)

1 tablespoon of fresh ginger has:

Vitamin B3 and B6
Iron
Potassium
Vitamin C
Magnesium
Phosphorus
Zinc
Folate
Riboflavin
Niacin
The U.S. Department of Agriculture’s MyPlate guidelines notes that ginger is considered safe and nutritious when eaten as p