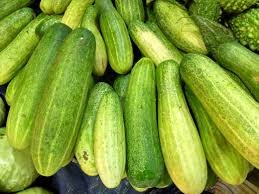 Cucumber, Cucumis sativus, is a warm season, vining, annual plant in the family Cucurbitaceae grown for its edible cucumber fruit. … The leaves of the plant are arranged alternately on the vines, have 3–7 pointed lobes and are hairy. The cucumber plant produces yellow flowers that are 4 cm (1.6 in) in diameter.

Few foods are as cool as a cucumber. These low-calorie veggies contain many nutritional benefits, including hydrating properties and valuable nutrients.

While most people think of cucumbers as vegetables, they are actually a fruit. They contain seeds and grow from the ovaries of flowering plants. Cucumbers are members of the plant family Cucurbitaceae, which also includes squashes and melons. The most common type of slicing cucumber found in a grocery store is the garden cucumber, Cucumis sativus, according to World’s Healthiest Foods.